The Friendly Village and Listening

Today I wanted to show off my Friendly Village. I never get tired of this lovely china. You have actually seen all of these elements in the past, and while this tablescape is very, very similar to other Friendly Village tables, I did try to do some things a little differently so that it wouldn’t look completely the same as the old one.

I started with the square red plates from Wal Mart. I love these plates and think that they are a great base for the dinner plate.

I tried several different plates as a top layer, but really wasn’t satisfied with any of them. So I stuck with the square salads (love those!) and added the San Remo flatware. I chose my colorful plaid napkins with simple brass napkin rings. These napkins have so many colors in them that I can use them in a variety of different table settings.

For glasses, I chose the vintage Ruby Red. I love these glasses and liked the way they looked next to the Friendly Village mug.

Then I started thinking about a centerpiece. One thing that came to mind was using the platter that matches the red plates.

I also thought about using this lovely vintage Salem platter. The deep burgundy rim will blend well with the Friendly Village, and I don’t think that I have used it in a tablescape before.

I tried a pillar candle and didn’t like the look, so I got out my old faithful Wal Mart candle tray with votive holder. Instead of using the river rock, I used the red, white, and neutral beads to accent the base.

But I still wanted to use the red platter, so I tried it under the metal tray. Well, it doesn’t look bad, but I wasn’t totally satisfied with the look either. Also, I don’t have the leaf in the table, so I can’t really hold a very long centerpiece. Therefore, using both in the center wasn’t really an option.

I remembered my Red Leaf pottery praying crosses and placed them on the red tray. I had some pretty heavy things on my heart the day that I was working on this table, and those praying crosses had helped me through some deep prayer time. I did not actually pick them up and hold them in my hand like they are intended. Just looking at them and handling them while working on this table was enough to get me centered and grounded. Anyway, I liked how they popped off the red background of the tray.

I ended up pleased with the final look. The table is both familiar and refreshing.

Truthfully, I have decided that any way to use the Friendly Village is the right way. I just can’t go wrong when I use this versatile pattern.

As for things that are on my mind, they are still there. But I read some amazing words in my devotion yesterday that jumped out at me.

After six days Jesus took with him Peter, James and John the brother of James, and led them up a high mountain by themselves. There he was transfigured before them. His face shone like the sun, and his clothes became as white as the light.  Just then there appeared before them Moses and Elijah, talking with Jesus.

Peter said to Jesus, “Lord, it is good for us to be here. If you wish, I will put up three shelters—one for you, one for Moses and one for Elijah.”

While he was still speaking, a bright cloud covered them, and a voice from the cloud said, “This is my Son, whom I love; with him I am well pleased. Listen to him!” Matthew 17:1-5

Peter wanted to take control, to build shelters, to preserve the moment. What does God say? “Listen to Him.” Sometimes we need to hear those words. It is not about my saying, doing, or controlling.  It’s about stopping. It’s about being silent for a while and listening and paying attention to Jesus. [Adapted from The Upper Room Disciplines devotional book.] 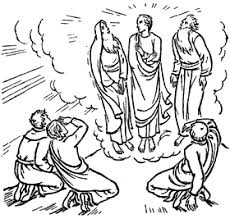 Wow! Did I need those words that day (and every day!). I need to listen more, as Peter was instructed, and to pay attention. Well, that’s my huge insight for today, folks! Hope everyone has a great week of tablescaping and listening.

I am joining: A Stroll Thru Life for Tabletop Tuesday, Home and Garden Thursday at A Delightsome Life , Vintage Thingie Thursday at Colorado Lady,   From the Farm at Sunny Simple Life, Between Naps on the Porch for Tablescape Thursday, Metamorphosis Monday, Masterpiece Monday at Boogieboard Cottage ,  Cozy Little House for Tweak it Tuesday,  Under the Table and Dreaming for Sunday Showcase ,  The Charm of Home for Home Sweet Home, Brown Gingham Creations for Rednesday,  Cuisine Kathleen for Let’s Dish, Treasure Hunt Thursday at From My Front Porch to Yours,  Make the Scene Monday at Alderberry Hill , Cottage Style at Lavender Garden, Homemaking Paty at Hope in Every Season,   The Tablescaper for Seasonal Sunday, The Thrifty Groove for Thrifty Things Friday, What’s It Wednesday at Ivy and Elephants; Weekend Bloggy Reading at Serenity Now, Meet Me Monday at You Are Talking Too Much,  Spotlight Saturday at Classy Clutter, Feathered Nest Friday at French Country Cottage, Pink Saturday at How Sweet the Sound, You’re Gonna Love It Tuesdays at Kathe with an E, Mop it Up Monday at I Should Be Mopping the Floor , Wow Us Wednesdays at Savvy Southern Style ,  Make it Pretty Monday, Anything Blue Friday at The Dedicated House,Wow Us Wednesdays at Savvy Southern Style,  Create It Thursday at Lamberts Lately,   Flaunt it Friday at Chic on a Shoestring,  Tuesday’s Treasures at Uncommon Suburbia,  Return to Loveliness at A Delightsome Life, Centerpiece Wednesday at The Style Sisters,Open House Party at No Minimalist Here Time Travel Thursday at The Brambleberry Cottage , The Scoop at The Stone Gable, Thursday Favorite Things at Katherine’s Corner , Sizzle into Summer at DIY by Design

I am a retired teacher who has only recently taken up tablescaping and blogging. For more information, see my About Bev link.
View all posts by Bev →
This entry was posted in Tablescapes and tagged brass, brown and neutrals, Friendly Village, red, Red Leaf, Ruby Red, Salem China, San Remo, scripture, Wal Mart. Bookmark the permalink.

18 Responses to The Friendly Village and Listening