Before I update you on my mantel décor, I’ll show you a couple of recent furniture projects that David has finished. 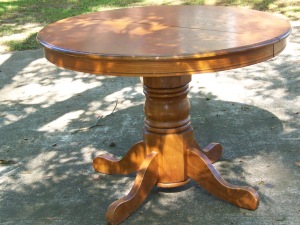 We purchased this nice oak table from Driveway Man. It only had 2 chairs with it, but most tables we buy don’t have any chairs. 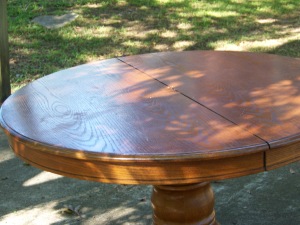 It’s hard to tell from the shadows, but the top did need some work. 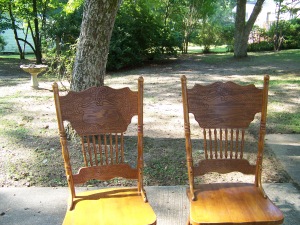 The chairs also needed work. Although not a true vintage set, the wood was of good quality and the set had a good look to it. 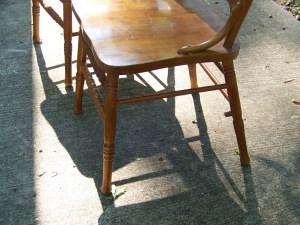 David did a lot of sanding as well as some rung repair, as you can see. 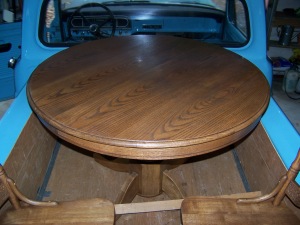 I forgot to take the after pics until he had the set loaded. That table is now just gorgeous, with all of the grain of the wood brought out. 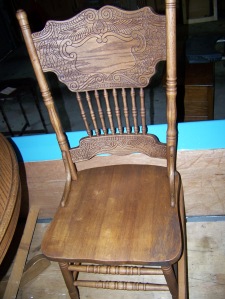 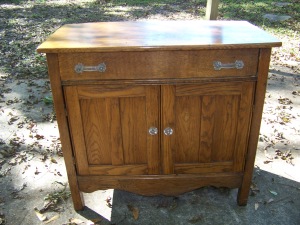 We purchased this washstand at an estate sale. Although not old, it is a very fine quality reproduction. We have no idea why someone would put these awful Lucite handles on such a nice piece. 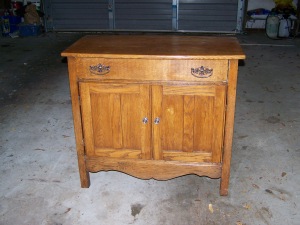 It was raining the day that I took the pics, so I had to make them inside the garage. However, you can still see what an improvement the right type of hardware makes! 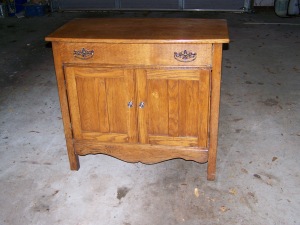 This has ended up one of our favorite pieces!  Both this washstand and the above dining set are in our booth, and I will report when they sell. 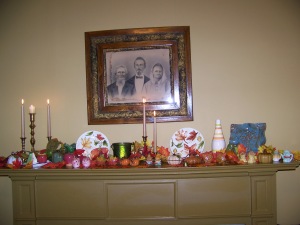 If you have ever read my blog, you know that I am pretty strongly opposed to decorating for the holidays too early. However, I was very tired of my fall mantel, so I decided to start working on it a little bit this week.

This is my third mantel arrangement, and I think maybe I am finally happy with it. The story of our applique stockings is here, and I hope you will read it when you have some time. This year I had the idea that I want to show off some of my salt and pepper shakers. I wasn’t really happy with the way I had them arranged and asked for David’s advice when he came in from work. 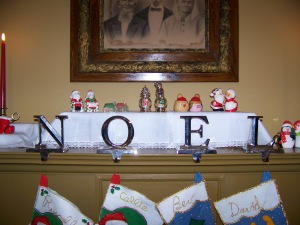 He suggested the different levels and even went out into the cold, pouring rain to get some two-by-fours from the garage. I suggested covering the blocks of wood with the white napkins, and he thought that was a great choice to make the Noel stocking holders show up better. I suggested using cans to make this block taller that the stocking holders, so this block is placed on cans of Ro-Tel. 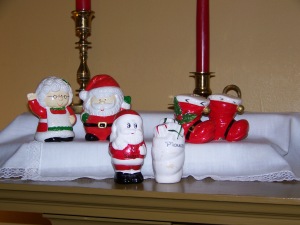 He used the blocks with no lifts under them for the other sides of the vignette. 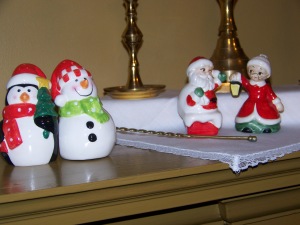 Because I had red tapers, I chose sets that carried out the red and white color scheme. 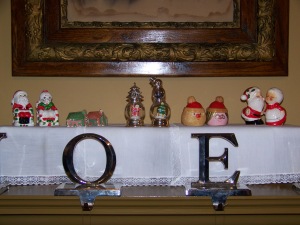 David suggested that the middle pair on the large block needed a little more “presence,” and the sterling pair in the middle were perfect for that position. 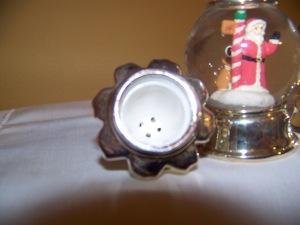 This unusual set of shakers has snow globes in the bottom. The tops unscrew to reveal the space for the salt and pepper. 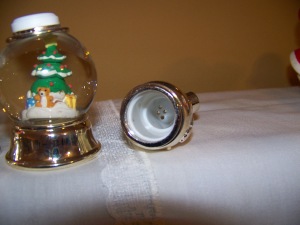 Like most of my shakers, they will never hold any salt or pepper. 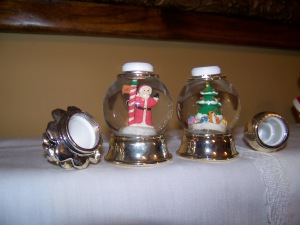 I do love this unusual set, and its height was perfect for the place of prominence in the vignette. 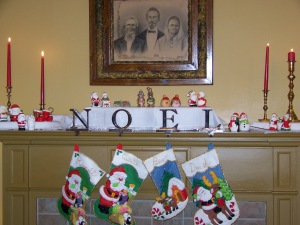 Finishing the mantel left me with another problem. What will I do with the other salt and pepper shakers? I tried a couple of different options. 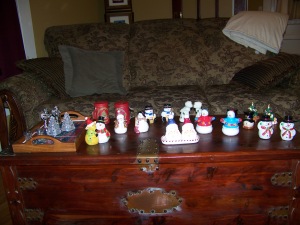 I finally settled on the coffee table. I spread the remaining sets out, and I like the way they look. 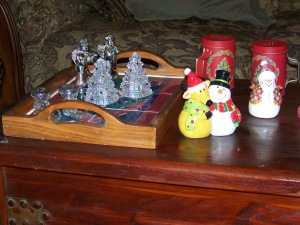 I even put a few pairs on my Gail Pittman tray. I may change this vignette up some later, but for now, I am good with it.

My final decorating task involved the Nativity scene. I won’t repeat the story of why I chose to do a mix-n-match manger scene. I will just say that a few days ago, I pulled out all of the individual nativity people and animals that I have been collecting for about a year now. Then I got my crèche out of storage, and played with them until I finally settled on an arrangement that I like. 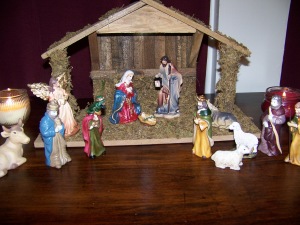 I decided to put the nativity scene on the sofa table in a place of honor by itself. 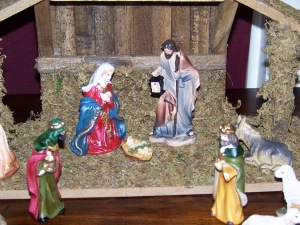 I really like the final look, and I am quite pleased with how it turned out. 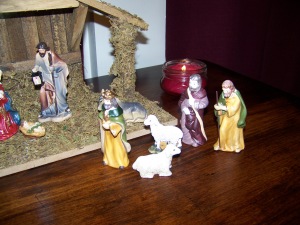 I don’t think that I ever expected a “put-together” scene to look so great. I may eventually purchase an actual set.

But for now, I like this manger scene and am happy with it. The leftover people are now for sale in my booth for fifty cents each. I am just hoping that some shoppers out there also want to put together a mix-n-match crèche! 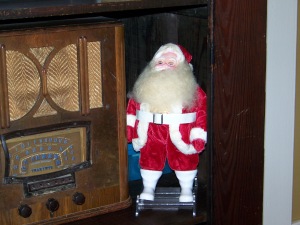 My last bit of décor is to show you my Santa. I have had him for over 50 years, and I normally put him on the mantel. 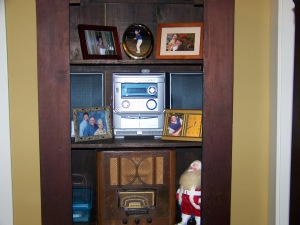 Since the shakers are on the mantel this year, I decided to put him in the entertainment center next to the old radio. 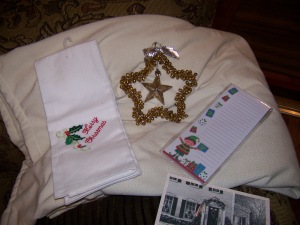 My final report has to do with the ornament exchange hosted by Vicky. I received my package in the mail yesterday, and my secret pal was very generous! Not only did Tina of clutteredcorkboard send a fantastic star ornament in my favorite decorating colors of silver and gold, but she also sent a yummy-smelling candle [not pictured], a lovely dish towel and sweet little holiday note pad. Thanks, Tina, for the wonderful gifts, and thanks, Vicky, for hosting this great exchange! 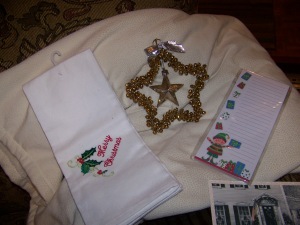 Best wishes to all of you in enjoying your holiday decorating!

I am joining: A Stroll Thru Life for Tabletop Tuesday, Home and Garden Thursday at A Delightsome Life , Vintage Thingie Thursday at Colorado Lady,   From the Farm at Sunny Simple Life, Between Naps on the Porch for Tablescape Thursday, Metamorphosis Monday, Masterpiece Monday at Boogieboard Cottage ,  Cozy Little House for Tweak it Tuesday,  Under the Table and Dreaming for Sunday Showcase ,  The Charm of Home for Home Sweet Home, Brown Gingham Creations for Rednesday,  Cuisine Kathleen for Let’s Dish, Treasure Hunt Thursday at From My Front Porch to Yours,  Make the Scene Monday at Alderberry Hill , Cottage Style at Lavender Garden, Homemaking Paty at Hope in Every Season,   The Tablescaper for Seasonal Sunday, The Thrifty Groove for Thrifty Things Friday, What’s It Wednesday at Ivy and Elephants; Weekend Bloggy Reading at Serenity Now, Meet Me Monday at You Are Talking Too Much,  Spotlight Saturday at Classy Clutter, Feathered Nest Friday at French Country Cottage, Pink Saturday at How Sweet the Sound, You’re Gonna Love It Tuesdays at Kathe with an E, Mop it Up Monday at I Should Be Mopping the Floor , Wow Us Wednesdays at Savvy Southern Style ,  Make it Pretty Monday, Anything Blue Friday at The Dedicated House,Wow Us Wednesdays at Savvy Southern Style,  Create It Thursday at Lamberts Lately,   Flaunt it Friday at Chic on a Shoestring,  Tuesday’s Treasures at Uncommon Suburbia,  Return to Loveliness at A Delightsome Life, Centerpiece Wednesday at The Style Sisters,Open House Party at No Minimalist Here Time Travel Thursday at The Brambleberry Cottage , Tips and Tidbits at The Stone Gable, Thursday Favorite Things at Katherine’s Corner , Sizzle into Summer at DIY by Design

I am a retired teacher who has only recently taken up tablescaping and blogging. For more information, see my About Bev link.
View all posts by Bev →
This entry was posted in Christmas, Mantel, Vignettes, Winter and tagged antique furniture, antique mall, brass, Gail Pittman, mantel, red, salt & pepper shakers, The Driveway Man. Bookmark the permalink.

14 Responses to Before and Afters; Salt & Pepper Shakers; Christmas Mantel